Panel design is an art. A well-designed panel strikes a balance of form, function, and cost. This can be difficult considering that an attempt to do so is an attempt at achieving the best of three worlds.

However, knowledge, is power. When a panel designer is well-informed, optimizing cost-effective protection into the panel design is easy.

This guide is tailored to panel designers who wish to strike the balance of form, function, and cost when choosing an industrial control panel’s SPD. It will teach panel designers how the correct SPD size is determined for each of the seven most common types of systems.

SPDs reduce surge voltages to a level that the power distribution system and the equipment that is connected to the system can handle. They protect the programmable logic controller in the equipment, the power supplies, the step-down transformer, variable-frequency drives, and the input/output devices.

SPDs are primarily rated by how much of a surge current magnitude they can handle, and how well they limit the voltage when conducting that surge current.

A survey of maintenance and facility managers by the National Electrical Manufacturers Association (NEMA) found that the reported cost of equipment damage caused by surges was not only expensive, but common. According to the survey:

SPDs are important. NEMA says their survey’s results “underscore the importance of the role that SPDs can fill in preventing damage to and improving the reliability of electrical and safety systems.”

Why Are US Panel Designers Abandoning NEMA-Style for DIN-Rail Mountable SPDs?

What is the correct way to determine which size of SPD to use in a system?

SPDs are not one-size-fits-all devices, nor do the size of their kA rating (the surge rating) go hand-in-hand with the size of the panel. In other words, do not select an SPD with a maximum kA rating just because the panel is large.

For example, for a single-phase system (also called a split-phase system), the line-to-line voltage is divided by two. The result is the optimal amount of volts that the SPD should have for that system.

Determine the Reference to Ground 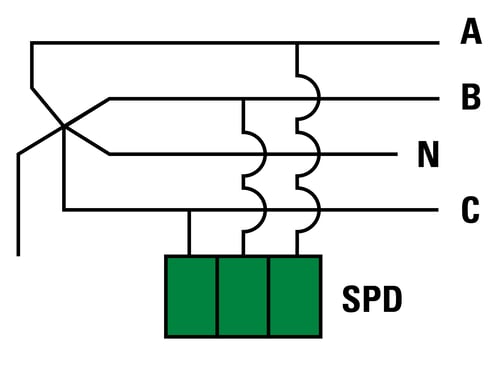 Information for sizing SPDs in every major type of electrical system, along with other surge protection-related information, is included in the full guide. To access the full guide, fill out the form below